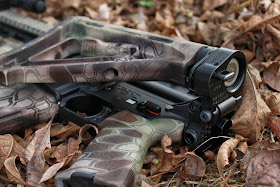 If you have been following our Facebook and Instagram for a while it is no secret that I have been dropping pictures showing off the Law Tactical Gen 2 Folding Stock Adapter. I have had my eyes on them since I saw the first generation of their products featured online a few months ago. Being able to be used on any AR platform from .223 to .308, direct impingement or piston as well as full auto. Law Tactical has produced a game changer.

My first impressions when unboxing the adapter was that it was extremely well built weighing in at around 6 ounces; it does add slight weight to your rifle. Included in the package are very detailed instructions, the adapter, and a small package of Loctite.

What is not included are the hex keys needed for installation, however if you watch the installation video on YouTube they put together installation is much easier than using the instructions as part of the hinge needs to be taken apart for assembly.

Once the adapter was installed I couldn’t wait to get it to the range and test it out, although Mother Nature had other plans. Finally after a few weeks I was able to make it out for some testing. I had no plans to shoot the rifle while the stock was folded as it clearly states not to, and there is already a video posted of this and the destruction to the adapter afterwards. Installation has already been covered flawlessly by Law Tactical, so I decided to focus on the one question I had been asked the most; “Is the bolt carrier group exposed to dirt and debris when the stock is folded open?”

To answer the question the adapter comes with an adjustable steel bolt carrier extension that fits in the back of your BCG whether it is a 5.56 or .308. This extender allows the BCG to function normally with the added distance through the adapter while firing. It also prevents dirt from entering into the BCG.

To test the effectiveness of the bolt carrier extender as if you were exiting a vehicle with the adapter folded and dropped the weapon on the ground prior to firing. We have been getting hammered with rain lately and the ground was a sloppy sandy mess on the shooting lanes where the rifle was dropped. I then picked up some sandy soil and threw in the back.

The first shot I was a little nervous but it went off without a hitch, just a ton of smoke exiting the ejection port. Subsequential shots showed less and less smoke caused by the moisture of the soil exiting the rifle.
In the end the adapter performed flawless under the conditions of the test.

I believe that this product is a must have for anyone owning an SBR. Even with a 16” barrel the Law Tactical folding stock adapter allowed me to conceal the rifle inside of my pack I take to the range.  From the crew of an aerial platform to the everyday citizen that can now easily conceal their rifle in their vehicle, Law Tactical brings to the market a product that is simple yet very useful.